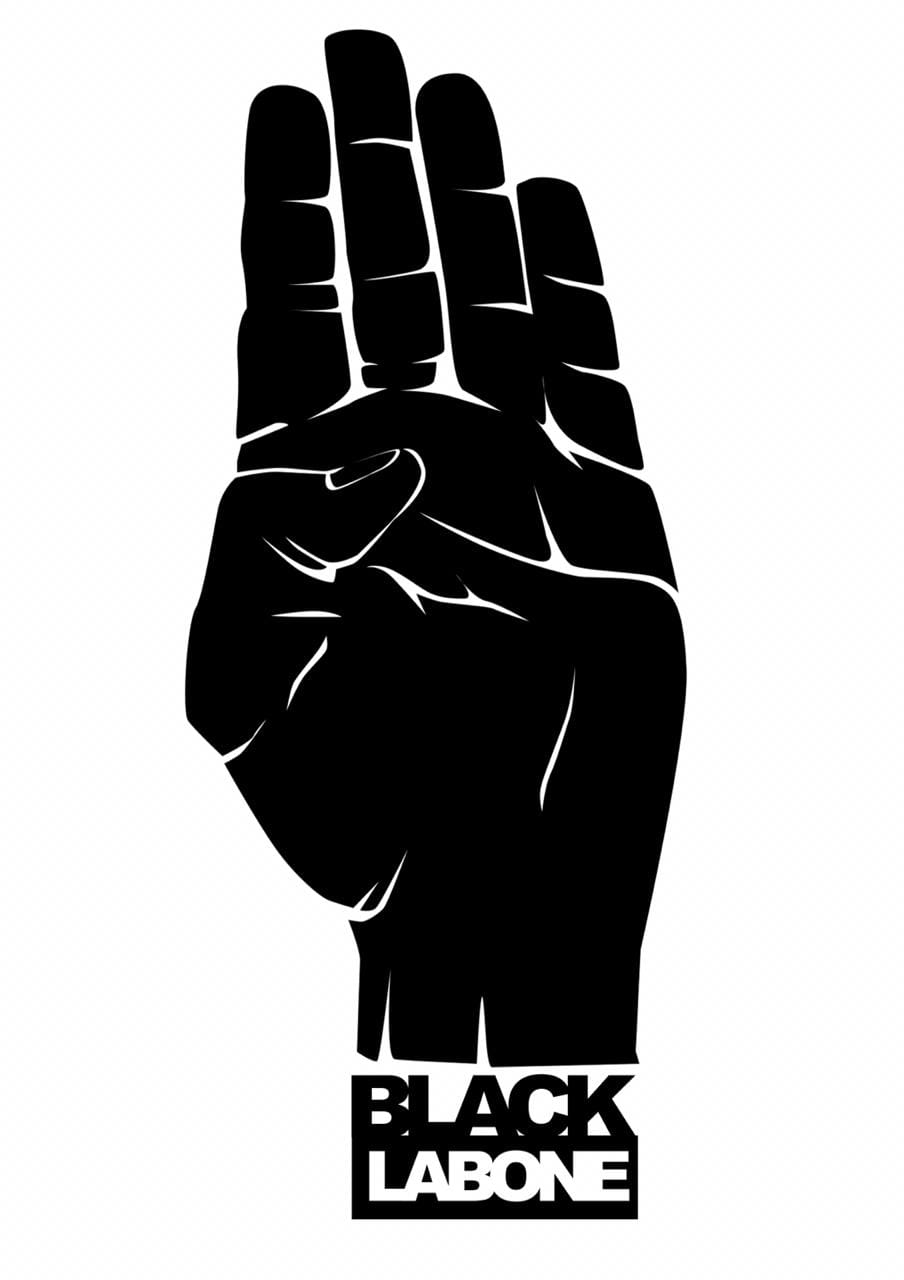 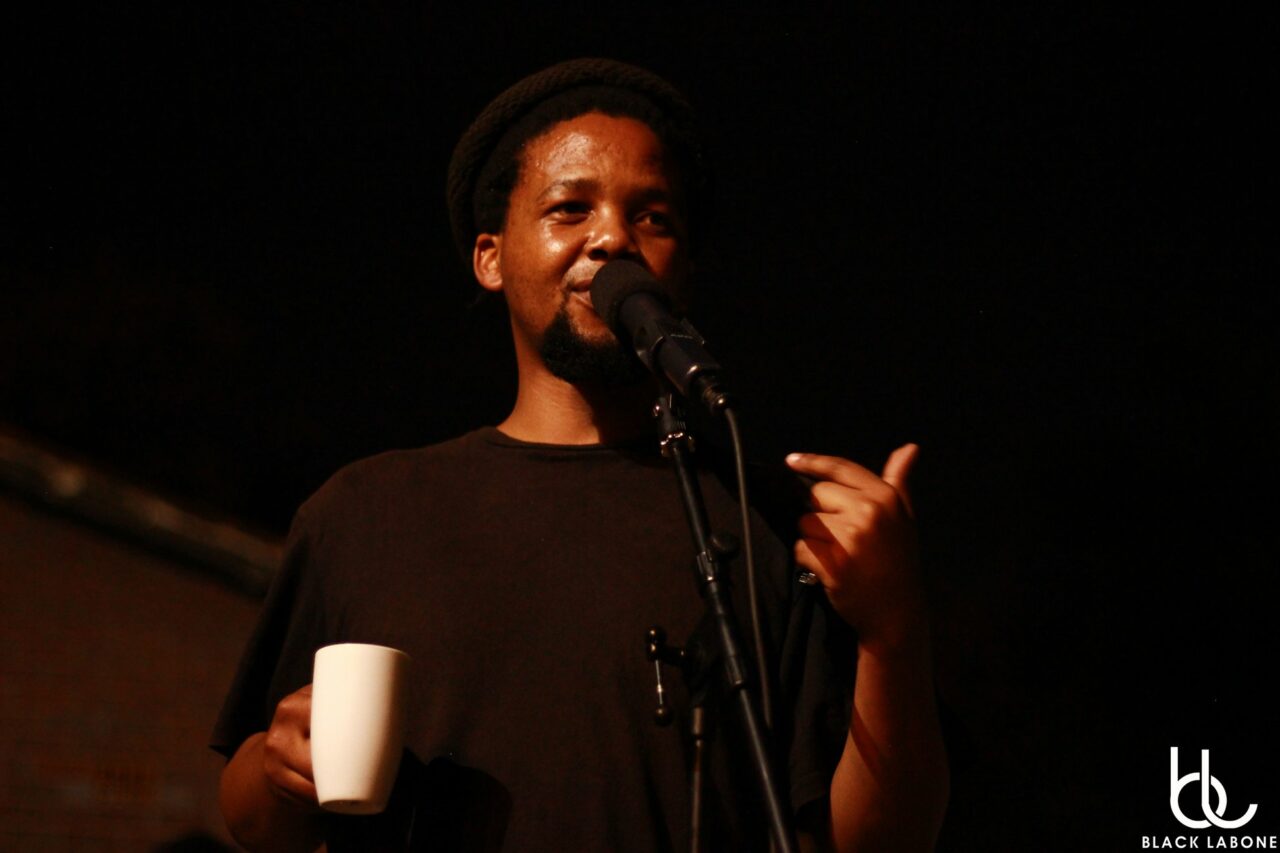 The first five years of a child’s life are said to be important for their physical, intellectual, and social-emotional development. Picturing that child as a black girl, how you raise her in this world is crucial. Well, that’s the analogy founder of Black Labone Izah Kutsh uses to describe the Pretoria-based art movement.

“Raising a girl child in these times is very sensitive, you know. It will always depend on the parents, but it will always be sensitive. It does need a very high level of sensitivity to get it right, to assist a girl child to navigate. We had a mantra where we said black women is god…where now we were bringing to Black Labone our own sacrifices, to say these are our offerings. The fruits we bore from the work of the day, we brought to Black Labone. So it is as much mystic as it is political,” Izah tells me.

It’s a Wednesday afternoon in April that I finally get to have a chat with Izah. Under the sun we chill, adjacent the entrance of African Beer Emporium, of course the squeaky bench we’re stationed on sits a bucket with cold Black Labels. I’m ironically writing this on a Thursday night in September, five months after the day and a month post Black Labone’s anniversary.

Black Label is particularly special to the Black Labone movement. The name came about following days of Izah and friends being hungover from guzzling Blacks. “It was on a week when we had been drinking from gigs from the weekend. I remember chilling with the guys on Monday. One of the guys said it was Blue Monday and I was like ‘How come, when we’re drinking a Black’… yaba yiBlack Mantaha,” he says. They carried on drinking throughout that week nursing hangovers with more beer, placing the ‘Black’ in front of the day they were drinking on. “But when it got to the Labone, the name stuck…and remember we wanted to do a gig on a Thursday…”

Black Labone is an abode for creatives of all kinds, mainly from around Pretoria, but also for those who hail from distant lands. That this movement is five years old is quite significant. It is not the first art movement of its kind in the Capital City, but has proven to be the most consistent.

For their fourth anniversary last year, Black Labone hosted what Izah describes as an origin’s story. “…we had an open discussion, sort of round table discussion where we spoke of movements that have been established in Pretoria before Black Labone…what their impact was and how things are looking for artists that were involved in those movements,” he shares.

The Ones Who Came Before

During the dialog, one of the things that kept coming up pertaining all these movements, is that they were mostly spearheaded by people from outside the city. “Be it Soweto, Mafikeng, Polokwane…these are people who were students in Pretoria. Then they establish and spearhead movements, in the city. Some of them get work here, some of them go back home or relocate because of work. Ku Phele imovement sbali, like akwenzekanga fokol. Now it’s just a memory, into abakhulumangayo estradini,” Izah says. His tone is a cocktail of sombre and frustration when speaking about these movements because of how good they were.

Black Labone’s fourth anniversary cellebrations paid homage to movements such as No Camp Chairs Poetry Picnic founded by Vangi Gantsho, Uhuru Wamayisha Poetry Movement, Capital Arts Revolution and other movements that happened around the city of Tshwane more than a decade ago. Some continued for a while after the founders left, but things weren’t the same. What’s weirdly consistent is the fall of the aforementioned movements and the organic birth of another.

With his aura of an old pedantic man that carries a hip soul, Izah speaks of how Black Labone was established. As much as its just him and I having the conversation, he reiterates that Black Labone is kept going by a dedicated team of people. At the time of the interview, the total Black Labone team stood at 16 people which include the in-house band, the guys at the door, DJs and floor manager.

“It took time to establish Black Labone because the mission was to create a movement that is freely available as these movements were, but also it needed to be self-sustaining. A self-sustaining programme but also a long standing programme,” explains Izah.

The Black Labone pilot took place in the last week of July in 2017 at the Old Fire Station, no invites were shared on social media as they routinely do today. The invites were through word of mouth. “If we invite people esibhaziyo thina, how many of them would come…conclusively so that we know that we are doing the launch. This is the pilot in July, first week of August is the launch.”

A handful of people pitched but what’s worse is that the sound guy didn’t bother coming. “isound azange ifiike King. So much so, on the day of what was supposed to be the gig became the meeting for the gig next week.”

From the unintended meeting, a solid plan of action was agreed upon. There was a sense of community in how people volunteered to provide sound, photography or assist wherever needed at the actual launch the following week. This must be the root of their slogan “Showing up is showing love.”

The movement has been at the African Beer Emporium for at least three years now after leaving their launching pad, the Old Fire Station. As Black Labone grew in numbers in mid-2018, the movement became a problem to some living at the Old Fire Station. “We had to leave the Fire Station. It wasn’t savoury…we left at a very sour point. In a space of a year, it wasn’t the space we launched the programme in. It changed rapidly.”

The Fire Station is partly an artist hub but also houses people who aren’t in the art space, creating a tussle between the artists and the residents. While that was ongoing, Izah and the team were already looking for alternative venues in the city to host Black Labone.

In early 2019 the guy who manages the African Beer Emporium had attended Black Labone at the Fire Station and liked it so much, he offered to host the movement at ABE, first starting it out as a First-Thursday concept featuring Black Labone as one of the items on their programme. “We said we’d rather have a three-month trial run and should it be successful, on the fourth month we’ll start doing it weekly gigs. But by the second month, we started doing weekly shows”

Black Labone has also been hosted at Four Four Two.

The spirit of volunteerism and sense of camaraderie works for the movement, at least until they are able to sustain themselves in that particular department. For example, the in-house band volunteered their instruments until now, where some instruments are provided by Marshall Music. “Marshall Music donated the drum kit to us, it’s our job to maintain it. They volunteered a drum kit, just like the artist volunteer their performances,” Izah says.

One of their goals was to be self-sustaining when they started because using personal funds wasn’t something they’d be able to withstand. “When we started, there were times where I paid for the sound myself…even team members would contribute directly. By self-sustaining, now the event doesn’t require any of us to pay from our pockets anymore. The program sustains itself in that regard.”

They now have an agreement with a sound company, Greenlight Sound, which provides sound every week. “Jonathan [Greenlight Sound owner] is not the first sound man we’ve worked with. We’ve had to go through a lot of them. Jonathan likes Black Labone more than it is worth, we don’t pay the worth of the sound. But because of the frequency of the gig also, it adds a bit of value. It’s the one gig he can trust to happen come hell or high water.”

The movement has hosted some renowned artists such MXO, MoAfrika, The Brother Moves On, iPhupho L’ka Biko, Sibusile Xaba, Ntsiki Mazwai and plenty more. There is also the thrill of always without fail, being introduced to new talent at Black Labone. Whether a folk singer on the main stage or a smooth spinner on the Annex Stage.

Some of the prominent artists are booked and paid for by someone who purely loves the movement. “There are bands that come to Black Labone funded to play. Sometimes anonymously. A person would tell us ‘arrange a date for the artist or band and I will a deposit on the Tuesday ahead of the gig'” Izah tells me.

Some of the artists that have played on the Black Labone stage will get a reminder from the organisers to return or even they’ll request to perform as part of their tour itinerary or simply to try out new material.

Izah says artist have also found ways of making gains within the Black Labone programme. Musician Thapelo Khumisi asked to perform and also campaign for votes after being nominated in the Classical Jazz category in the Central Music Awards. “At the end of his performance, he asked the crowd for votes…and he won.”