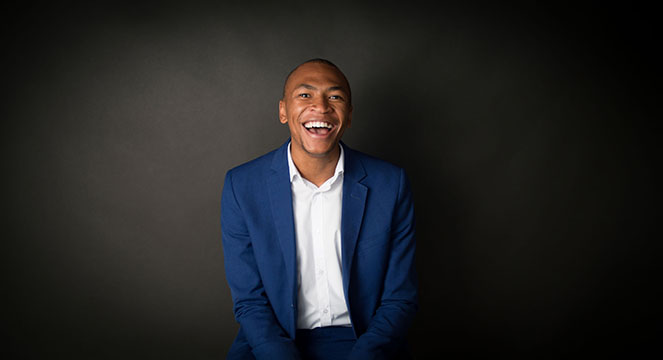 Director and Chief Curator of the Studio Museum in Harlem, New York City Thelma Golden once said an exhibition is in many ways a series of conversations. Between the artist and viewer, curator and viewer, and between the works of art themselves. It clicks when an exhibition feels like it has answered some questions, and raised even more.

In his first exhibition as the University of Johannesburg Art Gallery Curator, Thabo Seshoka has managed to facilitate the series of conversations between the artwork itself, the observer and the paintings and without imposing himself in the conversation, he lubricates these dialogues in Privileges of Proximity. “When I started curating the collection and working through it, I wanted to see myself, because as a curator you develop a relationship with your collection, you fight for it and you look after it. It’s interesting that we never show our collection and what’s in it and I wanted to start doing that. It was also about how there’s different messaging that exists in certain works and certain paintings, but we never really engage with them and that’s what I wanted to do,” Seshoka tells me on the opening of the exhibition, at UJ’s Auckland Park campus in Johannesburg.

The first item in the exhibition hangs on the wall on the left as you walk into the UJ Gallery. It’s Maggie Laubser’s Landscape with Sheep, while below it is Jacobus Hendrick Pierneef titled Ladskap. “I intentionally curated it this way because the Maggie Laubser is placed above the Pierneef, and Pierneef is considered to be a master and etiquette says it should be on top and by himself. But for me it’s about saying Maggie Laubser is also a master given she was painting at a time where women were either not allowed to paint and if they were allowed to paint, they painted still lives because that’s the only subject they had access to,” says 28 year-old Seshoka walking me through the works.

The first paintings depict various South African landscapes which some date back to the early 20th century. But Seshoka warns me about landscapes as I get immersed in the artwork. “Landscapes are problematic, especially the ones commissioned by the Government made by Pierneef. They depict South Africa as being empty but it wasn’t!”
A John Meyer painting of a house on what seems like a farmland hangs on the same wall- the house in the painting is in the Cape Dutch architectural style. Shoka encourages to look directly back to the opposite wall in the gallery where a line of black and white images of District Six dangle, buildings with the same Dutch architectural style feature in some of these images.

“I wanted to raise the question of land ownership. Because people from District Six were forcefully removed and their houses were demolished. Now in our new democratic dispensation they claimed back the land, but they haven’t been able to fully settle back in the space. For me it’s about how we exist, but also about how we present certain things and certain individuals,” says Seshoka. Adjacent the photos is a Willem Boshoff painting titled ‘n Huis in die Hemel (Kykafrikaans) which pays homage to individuals who were forcefully removed from District Six, but never got a chance to go back.

Seshoka took up the role of UJ art gallery curator in January following the retirement of Annali Cabano-Dempsey who was at the helm for 24 years. “Building on the work of the legendary Annali Cabano-Dempsey has been a tough act to follow, however, I am up to the task. Annali had deep commitment and dedication to the UJ Art Gallery over the past two decades, and I am able to build on the foundations that were laid by her. It is important to note that curation is diverse and complex. Every Curator has their own style of curation, operating a gallery, and executing their priorities. Since, my assumption of the role, there has been a lot of change management. We are repositioning ourselves within the broader South African and International Arts Communities,” says Seshoka. He previously worked at Robben Island Museum’s Exhibitions and Development, Research and Natural Environment units, as well as the institution’s Creative Team and Mayibuye Archives.

From questions of land, the exhibition changes gear through Gordon Vorster’s Gebroote-grond. The 91,4×182,2 cm oil canvas which depicts a male and a female obscurely drawn but with vivid eyes gazing at works on the opposite wall, conversing with it. It’s paintings and photographs of various women, including a picture of an African Jubilee Choir member which Charlotte Maxeke was also part of in the late 1800s. “The space here is to raise questions around gender, the role that women play but more especially the unseen role that they play and how they’re not actually appreciated.”

Everything in the exhibition is strategically place, serving a purpose. A sculpture by Naomi Jacobson titled Bushman looks out the window of the gallery. “For me he’s admiring that how much we have advanced, at how UJ has advanced. He intentionally looks the building called Madibeng because when RAU started you would have not seen a building named Madibeng,” Seshhoka poignantly says.

“Privileges of Proximity has given me the opportunity to critically engage with and reposition the collection, I am not disregarding what has been and in no way are my curatorial decisions absolute in nature. They seek to be questioned, engaged with and most importantly create dialogue,” Seshoka says.

“Our art collection is still in the process of evolving, there are major gaps that exists within the collection, especially when it comes to female, queer, black and differently abled artists. Privileges of Proximity recognises and highlights the gaps that exists within the collection, hence the desire to create conversation and dialogue about the limited representation of marginalised groups.” He says the University will be hosting more exhibitions in the near future, Privileges of Proximity being the first conversation of many that leave observers asking themselves questions.