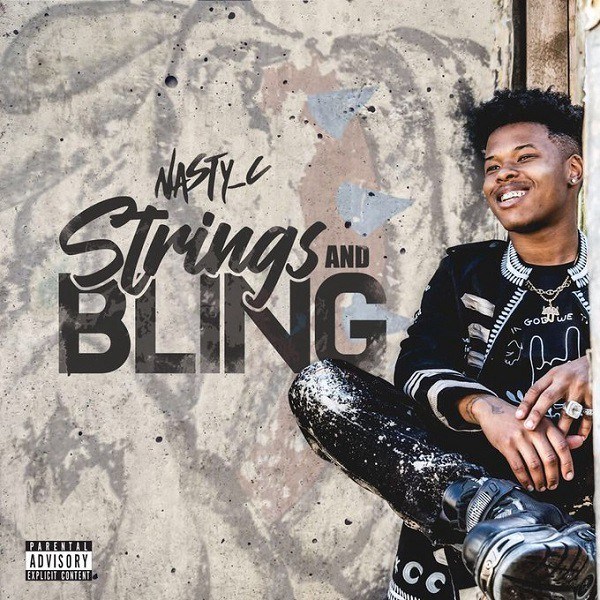 This isn’t unique to Mzansi Hip Hop though. The culture is pop culture and has been for a while now. The advancement of technology is a huge factor without a doubt. Not that there weren’t teens making music 20-15 years ago, but their market couldn’t directly consume the music and even purchase it at click of a button.

Which brings me to Nasty C’s Strings and Bling album.  Nasty C has enough skill to make it as a rapper even if you put him in the 90s. But he doesn’t make music that resembles this fact. He makes music for people around his age, while his music doesn’t transcend the times in any way.

Strings and Bling is definitely not an album I’ll voluntarily jam a week after this, but I’ll vibe to it when say, a friend bumps it in their car. The production is really good, I was impressed by his selection. I get a feeling he wasn’t going on a whim in choosing these beats. The general fell of the album is, as I understood, his (heart) strings and bling lifestyle. The production team served its purpose in how they captured the theme of the album. I was pleasantly surprised by the abstract sounding beat on Do U Dig. Legendary has a nice bounce to it, balanced by his lax braggadocio on the chorus rapping

Yol hate on me, and waste your breath

When you could breath, legendary, I’m jus being

Legendary me, when I’m feeling humble I just smoke

It’s more of the same shit, just a different toilet throughout the album. It’s different to what’s out there because it’s Nasty C- he has his own personal stories of heart break and his way of bragging about his lavish lifestyle, but in terms of musicality it’s not far off what’s already out there. Jungle got me confused with King feat. A$AP Ferg, not because the songs sound alike but because Jungle sounds like it’s a Ferg joint. My ear was expecting to hear the US rapper there.

Listening to Everything Feat. Kaien Cruz felt like being forced to watch a teenage chick flick with my niece and her high school friends, at their pyjama party. It was too mushy for my liking.

But U Played Yourself is my jam on the album. He raps about trust issues within relationships, and I think this song is a snippet of what we’ll get from a 25-27 year-old Nasty C in the future, he spits some honest bars that are beyond his age. The beat is like oil on water among the rest of the beats, but somehow sits well on the album like oil does over H2O.

When I listen to most South African rappers, I have this incessant feeling that these people are trying to sound American. Their cadence and pronunciation of words is a giveaway. But these kids consume American culture every day, it’s inevitable how they’ll turn out. Casanova is one of the examples on the album.

The album isn’t intended for me. My turn-up gang will surely appreciate this and more importantly, Nasty’s huge high school-varsity audience. Having a braggadocio outlook is very much part of Hip Hop, but it’s not all that Hip Hop is.