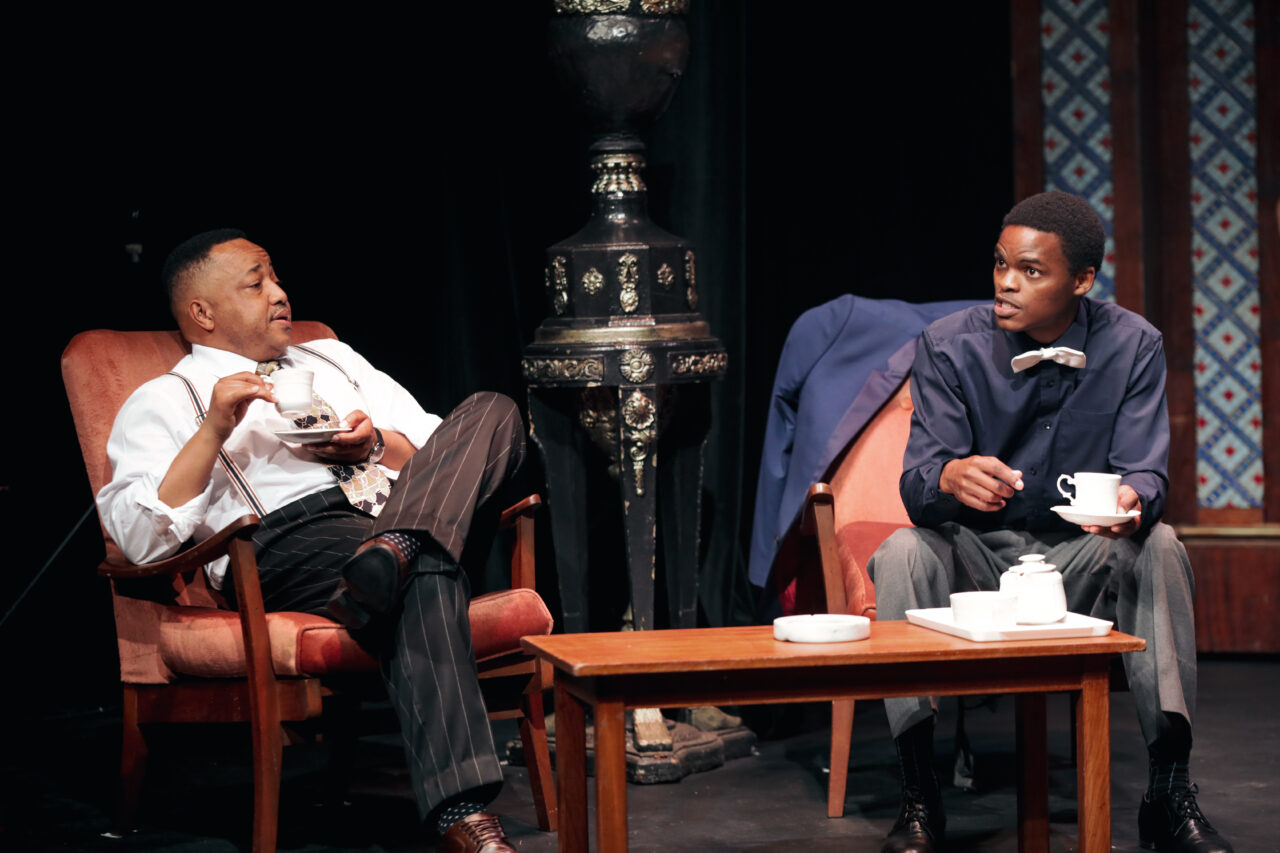 I’m unsure of the context around Malcolm X’s words when he said “I believe in the brotherhood of all men, but I don’t believe in wasting brotherhood on anyone who doesn’t want to practice it with me. Brotherhood is a two-way street.”
But I am certain of how these words capture the genuine camaraderie between Bloke Modisane and Langston Hughes. The friendship between the two writers and activists from Sophiatown, South Africa, and Harlem in New York, respectively is explored in the Bloke and His American Bantu-a play currently showing at the South African State Theatre.

Written by author Dr Siphiwo Mahala and directed by renowned television and theatre actor and director Sello Maake kaNcube, the story is based in the 1960s when Modisane was in exile, in London England. Experienced thespian Josias Dos Moleele plays the character of Hughes with such swagger while young actor Anele Nene puts in a career-defining performance as Modisane. The play traces the intellectual discourse that transpired between the two scribes from 1960 to 1967, a period during which they exchanged well over 50 letters.

Langston’s Reverence of Africa and Its People

Langston was a revered American poet, social activist, novelist, playwright, and columnist whose life and work were enormously important in shaping the artistic contributions of the Harlem Renaissance of the 1920s, who saw Africa beyond the drums and wildlife but appreciated the number of intellectuals the continent produced.
Throughout the play he fondly speaks of the Drum Boys-these were a group of writers for Drum Magazine during the publication’s halcyon days in the 1950s, which included Henry Nxumalo, Can Themba, Es’kia Mphahlele, Lewis Nkosi and Bloke himself. He insinuates that the rest of the world is sleeping on the brilliant minds that the South Africa has.

Langston travelled to other parts of the continent, exchanging ideas with other African intellectuals such as Wole Soyinka. This play showed his genuine affection for the continent.
Langston affectionately refers to Bloke as his favourite Bantu, this is quite significant considering the number of Bantus Langston came across. But his curiosity for and about Africa was fed by Bloke, whether it was language, people, or culture.

Being an artist or a creative looking for work is stressful enough, but that pain is doubled when living in exile in the land of your coloniser. In one scene Bloke writes to Langston about his woes and in it, Bloke’s pain is palpable-it seemed as though he was nigh taking his life. “…All I know is that I’m tired, nothing I do is good enough. Things don’t change, yesterday is just like today and tomorrow will be just like yesterday. I don’t know man, sometimes I just want to go back to South Africa, at least there I was alive Langston! something was happening all the time. But here, here I’m just dead,” writes Bloke in the letter which Nene powerfully portrayed on stage. Bloke’s words speak to that double-edge-sword that is unemployment and being exiled.
In his response, Langston as any brother would, chastises Bloke for not asking for help.
“Blokey, don’t be simple-minded just be simple. Why didn’t you write to me if you’re having things so tough, you know I would’ve sent you a little something…and no, no obligation, you don’t have to say thank you or anything,” Langston wrote back.
This honesty from both men, enabled the strengthening of their bond.

Chemistry of The Two Actors

The chemistry between the two actors is palpable as they bring to life a slice of history that is little known about the bonds that connected the South African liberation struggle with black America. It shines the spotlight on the role of artists and intellectuals in forging international solidarity during one of the darkest hours in the history of South Africa.

I imagine one of the most important things when doing a two-hander in any production, is the chemistry of the pair. Nene and Moleele’s combination epitomised Langston and Bloke’s friendship.
Sometimes when an experienced actor works with a young thespian, you cringe at the thought of the latter not being able to keep pace with the senior. But Bloke was channelled through bold acting by the talented Nene, who hails from Durban. The 25-year-old won the Ovation Award at the 2020 National Arts Festival for his one man show The Hymns of a Sparrow.

Moleele is multi-award-winning theatre and television writer, actor and director who has also appeared in international work such as Invictus directed by Clint Eastwood and a BBC television series Strike Back.
Moleele doesn’t just look like a grandson of Langston, but he also nailed the American accent without coming-off as a caricature. But beyond that, the actor made the audience feel Langston’s affection for Bloke.
It is by far the best play I have watched in years.

Bloke and His American Bantu runs from 7 to 24 July 2022. Tickets are only R130 on Webtickets, which is available at the SAST, in Pick n Pay stores, and online