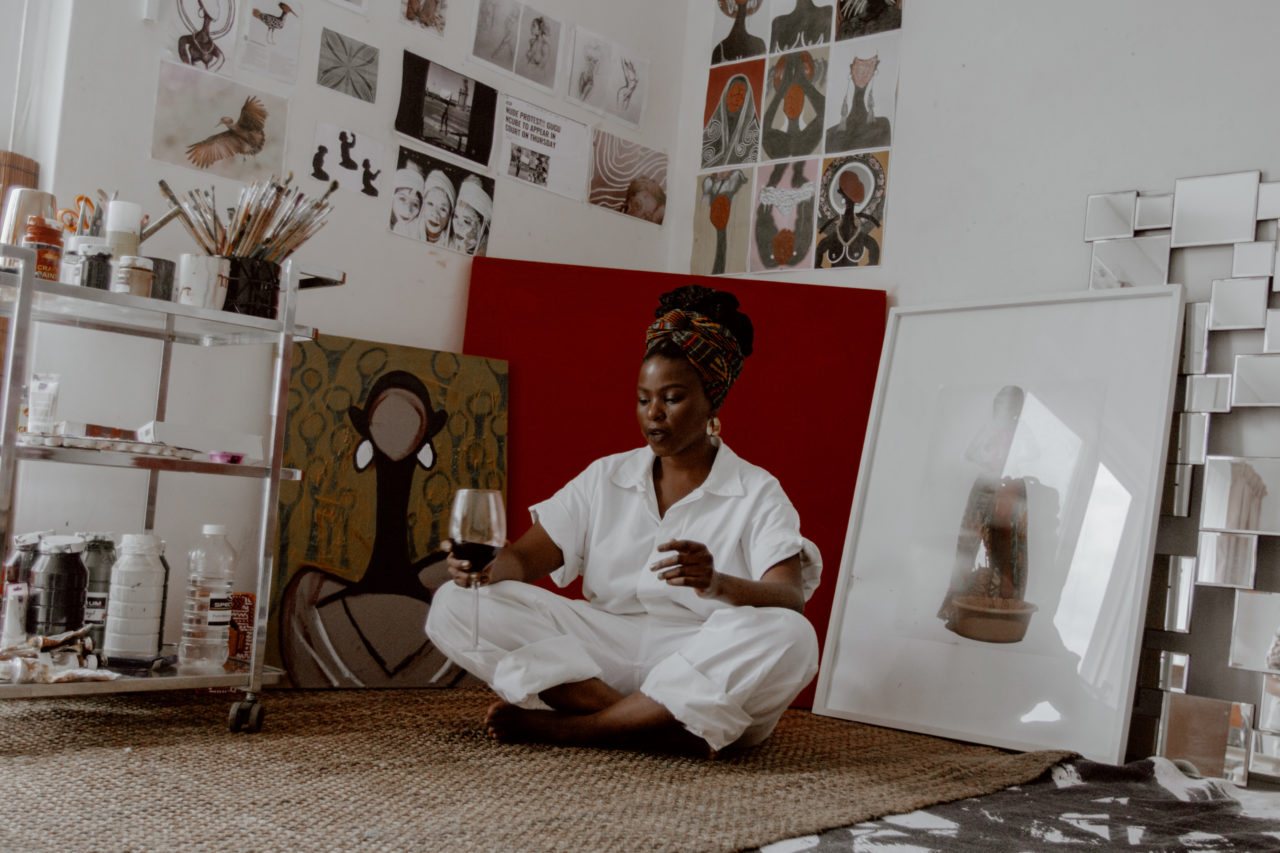 “The conqueror writes history. They came, they conquered and they wrote,” an elegant Miriam Makeba once said in an interview on TV in the 1960s. She was talking about how colonizers justified their invasion on the African continent, by writing history from their own perspective.

At the core of Makeba’s poignant words, is the importance of keeping record of your story. There’s a mighty child-like sincerity, you get from a tale relayed by someone or a people who have lived that experience. Curious Caucasian could immerse themselves in the various pockets of Black culture, for as long as one could, but they still wouldn’t truly know what it is to be Black. Such funk can’t be faked.

In art, like in most things, women’s voices have been stifled and not championed as the men’s. Females have been a muse for a long time, but a glaring gap of work inspired by women, made by ladies remains-although that space is being rapidly filled in modern times. Multi-award winning fine artist, painter and performer Selloane Moeti is one of the womenfolk occupying that space with the deliberateness and consistency of Apartheid architects.

“For me art influences society by changing opinions, documenting history, to teach and heal the next generation,” says Moeti. She is fully mindful of her contribution and the impact it can have. “Our stories are best told by ourselves, so to get to contribute and be part of an African woman narrative that will be documented and archived for decades. That alone means the world to be, an honour. I think it was Tracey Rose who said ‘When you make an artwork you’re not just doing something at that moment, you’re contributing to an entire history of artmaking,'” shares Moeti.

The sophistication of her work is in its simplicity. With a style that’s free-hand, one might mistakenly look at Moeti’s oil paintings as rudimentary. But the work is compelling. Beyond the eye-pulling aesthetics, you inevitably connect to the souls of the depicted black women. You feel the paintings. In one of her works in progress titled Amabutho, she painted black bodies adjacent to each other, looking ahead or marching forth. Their faces don’t include any facial features but are covered in red clay, yet you feel as though you’re gazing into eyes of fierce warriors. “I think people who interact with my work are able to walk away with the type of energy I convey on my work. It’s intentional that my style of painting is more rustic and free hand and that my characters or figures have clay masks as faces.”

Clay plays a significant role in a number of African tribes, for various reasons. Red clay, which is a symbol for protection and purification has an equally important role in Moeti’s body of work. “My work speak loudly about cleansing, healing, dislocation, and relocation. Even though my work is an attempt to trace and understand my lineage it still talks about my spiritual journey.”

“I dream like everyone else and chose to incorporate the characters, the compositions and certain components of my dreams in my work,” she says. You could say she acts on her premonitions. She has the proactive and determined spirit of the faceless women she paints. In 2017 when she longed for a space where she could exchange ideas with likeminded creatives in Durban and couldn’t find one, she established SketchIN-which is a figure drawing and conceptual development movement held every three months.

Due to lockdown restrictions throughout 2020, for two days late last year she turned her home studio into a makeshift gallery where people could come view her work. “Imagine creating work the entire year and having to just post it on an online exhibition or on IG (for me that was an anti-climax and depressing really). I’m a believer that art belongs to the public, but because of safety reasons I could only limit to a number of people and stretch it into a two-day open studio,” says Moeti.

previousWATCH : THE TOXIC RELATIONSHIP BLACK MEN HAVE WITH MONEY