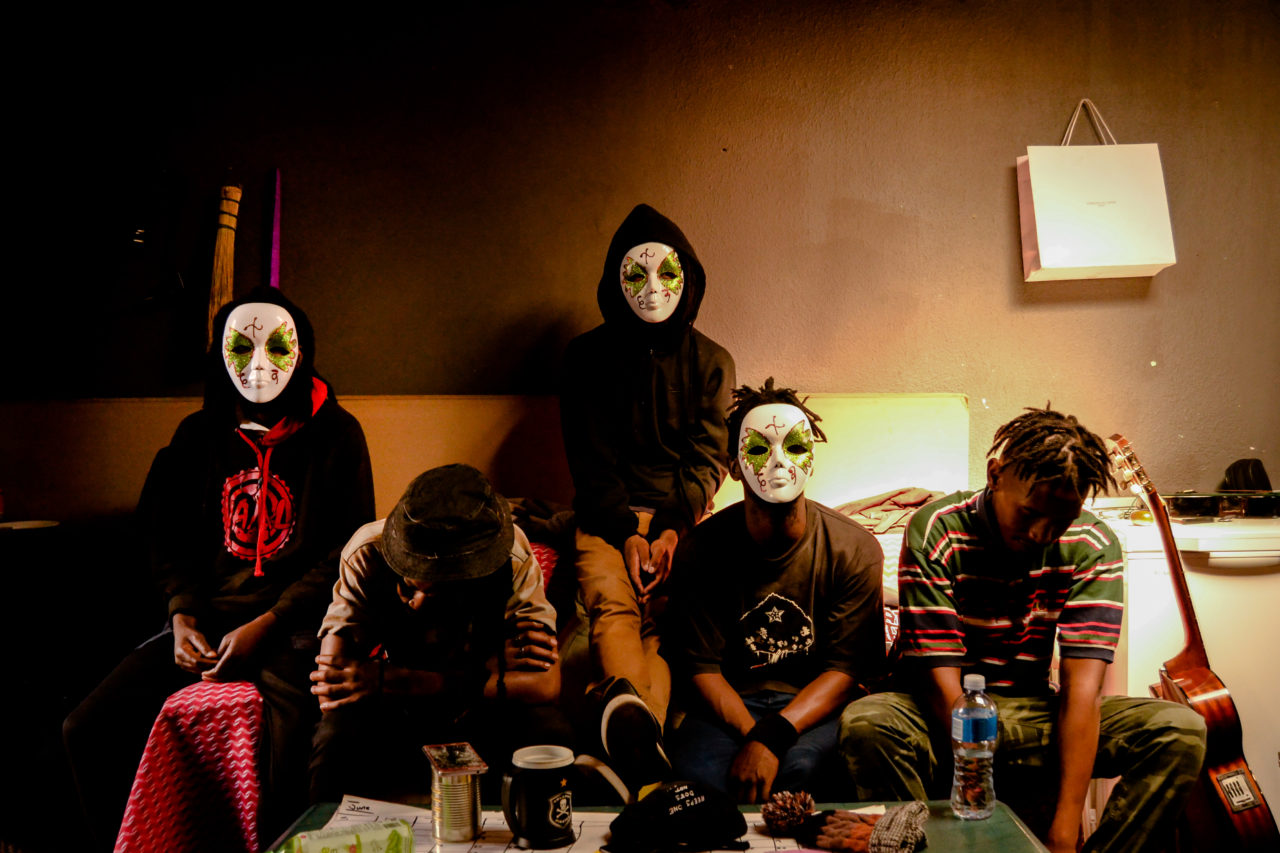 Miles Davis once said time isn’t the main thing, but the only thing and had it not been for time, the band T.U.G wouldn’t have been unveiled. With a name like Time Unveils God, the significance and respect of time to this ensemble is apparent.

“I feel like time is the thing that connects us. Time connects the people who’ve come before, the future and us. It puts it in a line, and if you understand that line you pretty much understand the godliness about existence,” says Tony Dangler.

Made up of five black men; T.U.G is a Hip Hop collective with two emcees on vocals, Darkie Umnt’Omnyama and Tony Dangler with three masked fellas playing drums, acoustic and bass guitars. The three instrumentalist are unidentified, but elected to take up abbreviations from the band’s name, for the purpose of this interview. T plays the bass, U acoustic and G is the drummer.

“The important thing about time is that, we must work and make music for the people, heal them and carry on working,” bassist T, tells me.

My photographer and I are welcomed by the scent of impepho, dank blunt and kindred spirits-I couldn’t help but embrace the calmness in T.U.G’s working space in Zondi, Soweto.  I interview the band crammed on a couch, like TV-watching siblings. The masks bring a tad bit of awkwardness to the setting, as I struggle to make eye contact with the three players of the band.

“It’s the unveiling part-we’re unveiling what’s not unveiled in a way. In essence regarding music, it shouldn’t be about the guys in the background. With Hip Hop, it’s just the rapper and the beat, so we try to represent that,” says U, who is the co-founder of T.U.G.

“The mystery is kinda interesting as well. It leaves more room for people to think, ‘oh okay, I hear the raps, but what’s going on?’ and you end up not paying attention to us,” the guitarist adds.

Lebohang ‘Page’ More, Sun Xa Experiment’s manager, is the other co-founder. “We thought we should have two guys who aren’t the same, and luckily Tony is from PMB and uDarkie is from Jabulani and it made sense.”

It’s Hip Hop in that these kats rap, but more spiritual in the manner in which they present their art. Their music talks to identity and all round knowledge of self as an African child. According to Page, they had planned to have a beat-maker before assembling the band. “We were pissed [about not having the beat-maker] and ended up going with the band. So it’s an idea that came to all of us differently, maybe I spoke about it, but everyone contributed enough and equally to what it is today.”

T.U.G’s abode is also the Digging Thoughts headquarters and home to Zen Groove Project and the well-known Sun Xa Experiment. I’m uncertain if it was the carpeted floors, the graffiti-laden wall behind me, and the number of joints being passed around or simply the people who gave me a distinct feel of serenity and one that inspires creativity.

Being privy to the band’s rehearsals displayed how they benefit from working here, in this space. “It give us a lot of creative freedom, ya bo. Everyone plays a role in expressing themselves and creating ideas; he [pointing at Darkie] doesn’t necessarily play instruments, but he’ll come to me with a hymn and say to me ‘yo, I hear this melody in my head..’ so the creative process just keeps going,” says U. Darkie Umnt’Omnyama adds “Eintlik die dang e deep. It’s the thing you’re feeling-we can talk about it, but can’t explain it. What brought us together here is what we feel,” he says.

Darkie is more of an enigma than the masks covering the band- his dry humour has everyone in stitches when he answers questions and seems to assume the father-figure role in the group. But he and Tony Dangler complement each other pretty well, despite their unique differences which set them far apart. Like Q.Tip and Phife Dawg. While Tony is the animated rambunctious character with a fine twang, uDarkie Umnt’Omnyama is the reserved rapper who has the grit that can only be found in rappers from the hood-but both delivering rhymes with equal intensity and honesty, remaining in the pocket.

Darkie predominantly spits in vernac, while Tony raps in English but both are able to switch. Tony is known from Hip Hop clique Revivolution, which he’s still a member of. “Ain’t nun change man. A few of them niggers [from Revivo] were like ‘yo, what’s happening’ and some of them were like ‘ayt, it’s cool’. Illy pulls through some time to check out what’s happening and also, I guess it’s just a matter of time dawg. Some niggers have time to come through, some don’t.  But everyone’s happy. Even Inferno’s back on his band business…it’s good that, that energy is vibrating out.”

T.U.G has only been together since late last year, but have performed at different places to gauge people’s reaction to their sound. They were at Smoking Dragon last year and will be at the Roving Bantu Kitchen in Brixton this Thursday. “So far yonke into e grand ya bo, I don’t recall us ever boring people; they can hear and understand what we’re about,” Darkie tells me.

They’ve also performed at Beverly Hills High school. “You hear that name and think ‘yoh, Beverly Hills’. It’s a school in the Vaal. We performed in front of those naughty kids, which felt like performing at a prison. But they responded well to our sound.”

“There’s a case where we performed for abantu abadala and e message e yaba thinta. We’ve also performed for drunk people and the message also went through. So the contrast of the audience is there,” Tony says.

Their association to Sun Xa puts them at an advantage, of gracing certain stages they wouldn’t have, had they been some random stand-alone band. They performed at one of Durban’s most sophisticated Jazz bars, The Chairman. But they are now carving out their own audiences, to distinguish themselves from Sun Xa, organically though they say.

Paraphrasing one of their songs, Heal Your Soul, Darkie says he wants people to walk away healed by their songs. “Kufanele aphole, phakathi na nga phandle. Whether someone has a headache or a sore finger, they should find healing and be good. This music doesn’t incite any violence or hatred, it makes the black person feel good.”

previousTJERR! YOUNGSTA'S 3T IS HELLA LONG, BUT WELL WORTH THE LISTEN

nextWHAT HAPPENED TO ALL THE X-RATED MUSIC VIDEOS WE GREW UP ON?