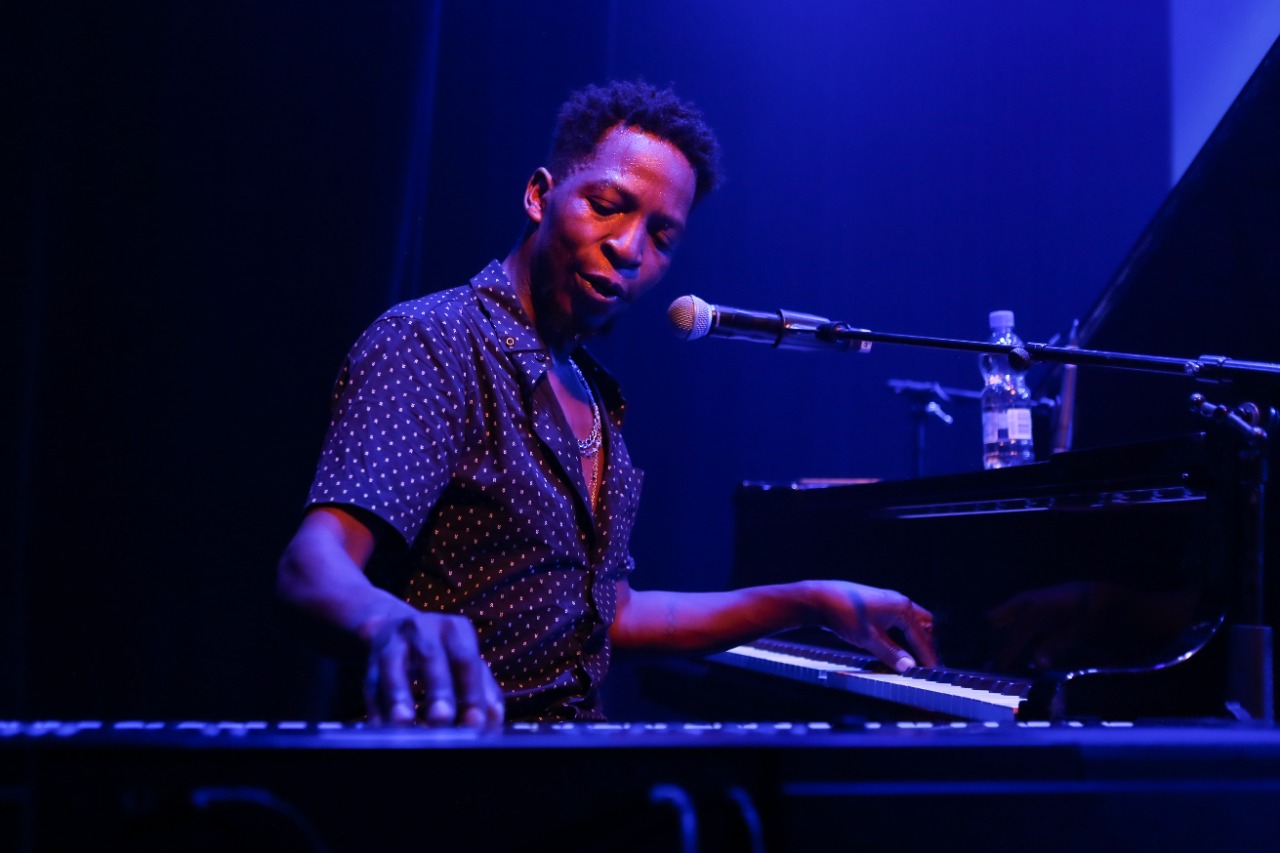 I couldn’t help but ponder on Perfect Hlongwane’s description of black joy, as Eskom’s blackout hit right in the middle of Malcom Jiyane and Nonku Phiri’s performance at the Joburg Theatre.

“There is laughter and there is festivity in the very pits of hell, because that is the only way to escape the searing licks of these flames, even if only briefly and in bursts whose volatility already gives an indication that they may not last,” the Culture Review‘s Associate Editor, Hlongwane said in describing the theme at last week’s Kulture Blues Festival.

The Uprize Ensemble which was performing on stage together, were the night’s last act. It was also the first time Jiyane played his much-admired album, Umdali. It was symbolic that the last song they performed before he lights were cut was, Sizwile. Nonku was just getting into performing her solo work went the theatre got blacked out. While a handful of people decided to leave as the organisers were re-connecting the sound to the generator, the rest of us were patient enough and watched the rest of the performance.

Phiri and Jiyane on stag together are a joy to watch. While Jiyane is the mad scientist dripping of sweat on keys, Phiri stationed under the blue lights she sorely asked for, was like a spiritual guide on her voice changer with her sound effects.

They were supported by Lungile Kunene drums and The Brother Moves On’s Ayanda Zalekile on bass. The latter’s singing took everyone aback, even Nonku turned back pleasantly surprised, with a smile she asked “And then wena?”. You could see it, feel it and definitely hear the joy that Eskom tried to steal as we sat in the audience enjoying the talent on stage.

Before their performance was Gabi Motuba and Tumi Mogorosi alongside. Gabi looked elegant in her green dress and her natural hair in fine splendour. Her voice exudes the tranquillity one would experience in a view of Mpumalanga’s Three Rondavels on a quiet morning. Every South African deserves to at least experience her voice live. While Mogorosi doesn’t fight with the drums, but somehow caresses them with intent. Bokani Dyer on piano, Daliwonga Tsangela on cello, Dalisu Ndlazi on bass complimented each other and that too, was black joy in action.

The day’s first performer was East London’s Luyolo Lenga, an eccentric artist with strong vocals. He opened his performance playing the Uhadi traditional instrument and then later played from his acoustic guitar. One would’ve liked to hear more of him playing Uhadi.

A common thread of the night was the artist’s complaints of the sound, which seemed to lie with the sound engineer of the day. While comedian Roni Modimola’s jokes left the handful audience cringing at times.

“It was a beautiful day. On and off the stage. Black love permeated the Joburg Theatre and when loadshedding hit us during Malcolm Jiyane/ Uprize Ensemble’s set, the spirits remained high and the musicians continued playing with high esteem, much to the adulation of the audience. It was a special night man,” says satisfied producer of the festival, Kulani Nkuna.